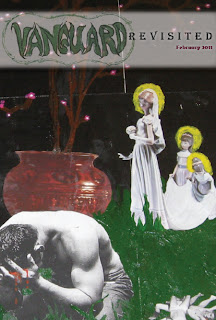 About the Magazine:
This magazine resuscitates the history of the 1960s queer youth organization Vanguard and explores the ways in which its history is embodied in the present.

Working with a variety of homeless youth services organizations, program coordinators Joey Plaster and Pastor Megan Rohrer presented the history of Vanguard to today’s queer youth. We then asked them to respond by submitting stories, art, and poetry “in conversation” with original 1960s essays, or touching on similar themes.

This magazine presents their writings along with reprints from the Vanguard Magazine of the 1960s. These materials are supplemented with archival materials, a historical narrative, and writings from urban ministers and youth organizers. Working over a period of three months with a group of youth at Larkin Street Youth Services, we sought to create a magazine that spoke to their expressed desire to “enlighten youth, celebrate the queer history of the Tenderloin, and create a voice for the unheard.”

The magazine is focused on the themes of:
Loneliness and Community, Poverty and Social Stigma, Drug Use and Sex Work, Sexuality and Gender, Mental Health and Queer Theology

Art By:
Jose Osario, Gotti, the Rev. Megan Rohrer and the original Vanguard

Special thanks to the archives that provided us with materials including: the GLBT Historical Society and the ELCA Region 2 Archive